How to curate and present big data sets in India? A group of about 70 coders and journalists met for the first Hacks/Hackers New Delhi hackathon in order to answer that question.

Attendees introduced themselves to the group and then pitched an idea for a data-driven story. Initial ideas included stories in environment, sports, health and crime. The group then broke into smaller groups of six to eight people, working to scrape and parse their data before coding their interactive data visualizations. 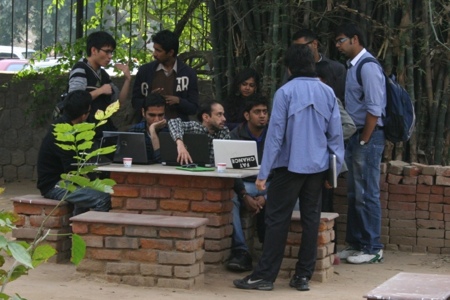 After four hours, the groups met again to present their demos. The ideas presented included:

Crimes against women, an interactive map of rape charges by state. The team added additional layers to show how often rape resulted in a police complaint, and how many of these complaints actually led to convictions.

Health investment and doctor availability, which graphed the availability of doctors by state, as well as investment made in each state by international health funding agencies.

Literacy and social ills, which graphed literacy rates per states against the occurrence of other social ills like crime and infant mortality, to see if literacy correlated with lower incidences of social problems.

Infant mortality, a heat map of infant mortality across states that attempts to visualize where the problem was most concentrated across India.

Many groups faced challenges gathering the data they needed, either because such granular data do not exist for India or because the information isn’t in the public domain. To read more about one group’s experience and see clips from their visualization, read journalist Pierre Fitter’s blog post.